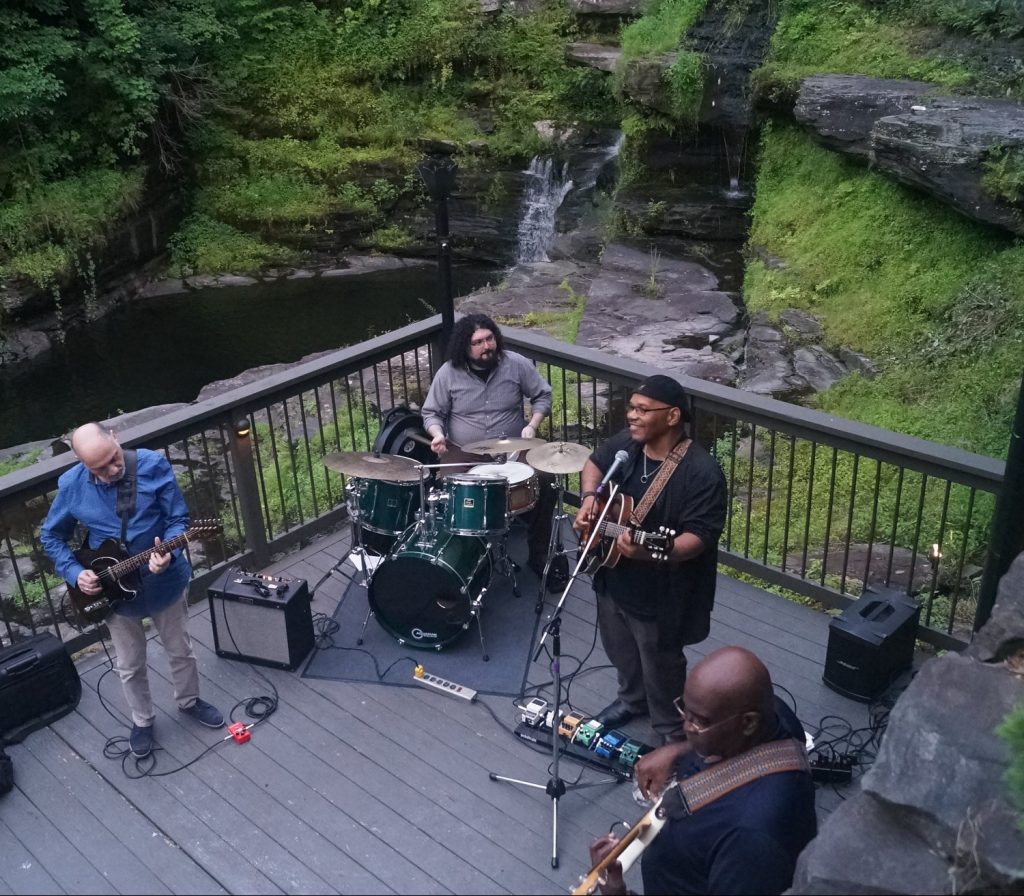 Glass- wine.bar.kitchen takes summer barbecues to a whole new level. Held every Sunday evening from Memorial Day weekend through Labor Day weekend, Blues, Brews and BBQ combines the talents of renowned Blues musicians with elevated barbecue fare and serves them up on the decks overlooking Paupack High Falls. The event has become a summer favorite for many in the Pocono Mountains region.

Sit on the deck surrounded by rock ledges of the Wallenpaupack Gorge and enjoy barbecue style specials while listening to live Blues music. Each week, dinner is paired with a featured selection from a local craft brewery.

A rotating schedule of performances taps into the talents of some of the region’s best Blues musicians. Here’s who we have on deck for 2022:

June 5- Merchants of Groove
The band has been performing throughout Northeastern PA since the late ‘80s. Along with original Blues music, the band blends classics from such artists as Muddy Waters, B.B. King, Stevie Ray Vaughan, Buddy Guy and The Fabulous Thunderbirds.

June 12- Randy Lippincott & Joey “Hot Box” Simon
As guitarist and vocalist, Lippincott has performed at the Ocho Rios Jazz Festival, the Montreaux Jazz Festival in Switzerland, the San Francisco Blues Festival and the Chicago Blues Festival. Simon is a master harmonica player who excels in traditional Blues styles as well as contemporary forms.

June 19- The Barn Cats
A staple on the festival circuit, the band is comprised of Jim Verdi on drums, Tom Rausch, bass and vocals, Jan London, guitar and John Rocklin, guitar and vocals. The band describes their style as funky, soulful Rock ‘n’ Roll.

June 26- Bobby Kyle Band
Kyle got his start touring with renowned guitarist, singer and songwriter Johnny “Clyde” Copeland. Since then he’s established his own unique voice and was recently inducted into the Blues Hall of Fame.

July 3- Teddy Young & the Aces
This NEPA native made a name for himself on the regional Blues circuit and even shared the stage with many of his inspirations including Bobby Parker, Little Sammy Davis and Slam Allen.

July 10- Gary Rixner & Indigo Moon Brass Band
The graduate of Carnegie Mellon University School of Music was a featured soloist at Carnegie Hall. As a trombonist he has played with The 5th Dimension, The Temptations, Frankie Valli, Bill Haley and The Comets and The Four Tops.

July 17- Scott Weis Band
After touring the East Coast for 10 years, the band was inducted into the Blues Hall of Fame as a Great Blues Band of PA. They’re known for their distinctive brand of Rock charged full of emotion.

July 24- Norman Taylor & Blue Soul
This singer/songwriter draws influence from a variety of genres including Country, ‘70s Rock, Soul and Gospel. Hailing from the South Jersey/Philadelphia area, the band is known for its Blues and Roots music.

July 31- The Jeremy Langdale Band
A favorite in the Hudson Valley music scene, the band’s sets include everything from Classic Rock and Blues to Funk, R&B and Soul.

August 7- Rich and The Jumpstarts
The trio formerly known as Yasgur specializes in American Roots combo playing a mix of roots, rock, blues, country and soul.

August 21- Dan Brother Band
Known for his fierce guitar work, Dan is also a prolific songwriter. The band has gained a following for its mix of Blues, classic Southern Rock, Soul and Rock ‘n’ Roll.

September 4- Bobby Kyle Band The Blues Hall of Famer returns to close out the season in style.

Make the most of Summer nights in the Poconos with our Blues, Brews and BBQ Lodging Package, which includes a Sunday night stay, $70 voucher for the BBQ and a full country breakfast in the morning at our sister property, The Settlers Inn. Summer is fleeting, so book your stay today.