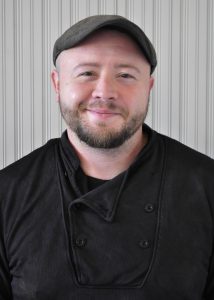 Chef Travis Lugo began his career at Settlers Hospitality crafting the small plate, rustic cuisine for which Glass- wine.bar.kitchen is known. He came to Settlers Hospitality after years working alongside well-known Manhattan chefs such as Eli Collins. But Travis says the idea to become a chef first percolated while enjoying the meals his mother made at home. His culinary dreams were further flamed by the ideals of Chef David Kinch. “His precision in cooking and belief in letting ingredients speak for themselves were really an inspiration,” say Travis.

These days Travis draws inspiration from the high-quality ingredients at his disposal as well as the caliber of the restaurants around him. As Executive Group Chef for Settlers Hospitality, he relishes the opportunity to cook with fresh, locally sourced ingredients. Guest-favorite dishes at Glass- wine.bar.kitchen run the gamut from the charcuterie board to the Brussels Sprouts and Hangar Steak. The restaurant’s surrounding sets the tone for the experience. The unique blend of historic and modern afforded by the repurposed Glass Factory lets diners know they’re in for something out of the ordinary. Tables overlooking the river gorge and Paupack High Falls add a touch of drama. 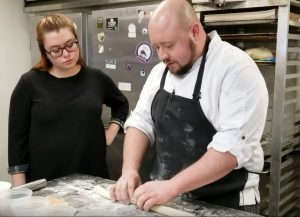 Creating innovative plate compositions and bold flavor profiles that complement the main ingredients are a source of pride for Travis. “Our small plates reflect the modern and refined ambience of the restaurant,” he explains. His go-to ingredient in achieving those signature dishes is lemon juice because of its ability to balance and enhance other flavors. The menu offers creative dishes such as Cauliflower Tacos topped with pow pow sauce and maple chili carrots made with chili pepper and maple syrup.

Travis makes his home in Stroudsburg, PA. He’s an avid outdoorsman who enjoys fishing, hiking and woodworking. He also loves to spend time training his German Shepherd, Jax. Travis appreciates the close bonds he’s been able to forge with his co-workers at Settlers Hospitality. Together they’re able to offer guests an unparalleled dining experience. “I like people to leave feeling their expectations have been met. If they’re satisfied and full, I’ve done my job,” states Travis. 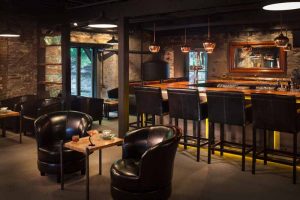 Experience the refined cuisine of Glass-wine.bar.kitchen at Ledges Hotel ,Wednesday-Sunday. Small plates made for sharing allow you to sample a variety of menu items. Watch for special events held throughout the year including the hugely popular Blues, Brews and BBQ each summer.