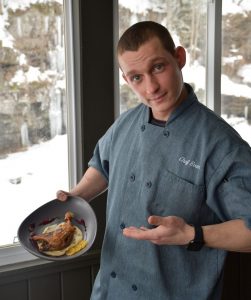 Things have come full circle for Chef Evan Munley. The recently minted executive chef at Glass-wine.bar.kitchen is returning to his roots at the restaurant where he first got his start five years ago. Then he worked as line cook and sous chef alongside Travis Lugo who now serves as Executive Group Chef of Settlers Hospitality. Chef Evan says the guidance, instruction and mentorship he received from Chef Travis were instrumental in his career.

Create
Following stints as Chef de Cuisine and Co-Executive Chef at sister property, The Settlers Inn, Chef Evan is excited to put his stamp on the small plate cuisine at Glass- wine.bar.kitchen. He recently introduced Ramen Bites, which he calls “a unique conception of a larger dish.” The flavorful bite includes pork belly, bone broth, crispy noodles, garlic and cured egg yolk. It was the opportunity to be endlessly creative that made Chef Evan choose this profession. “I cook from the heart. I love to collect ideas and bring them to life,” he says. Glass-wine.bar.kitchen is known for its innovative fare. With Chef Evan at the helm, the menu features new dishes such Parisian Gnocchi, Korean BBQ Chicken and Duck Leg Confit. The latest offerings join long-time guest favorites including the charcuterie board, grilled steak and mac and cheese. Lemon juice is Chef Evan’s go-to ingredient. “It brightens dishes and brings flavors to the front of your palate,” he explains. Creativity combined with technique is always the goal. Chef Evan points to Thomas Keller’s classical French methods as a source of inspiration in the kitchen. 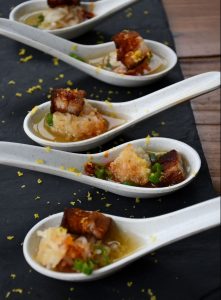 At Settlers Hospitality he says co-workers become like family and any day spent cooking with his team is a good day. The close bonds forged in the kitchen only further enhances the experience they’re able to provide to guests through food. It also complements the intimate, secluded ambience of the restaurant. The addition of private dining greenhouses and igloos tap into the trend toward private dining options that Chef Evan feels will continue for the foreseeable future.  When he’s not working, the devoted dad loves to spend all of his free time with his daughter Madelyn. They reside in nearby Lake Ariel in The Hideout community.

Crave
Ultimately, Chef Evan hopes guests to Glass- wine.bar.kitchen are wowed. Wowed by the small plates menu. Wowed by the culinary technique. And wowed by the view of the waterfall. As long as each guest leaves with an instant hunger to return, then it’s job well done by Chef Evan and his team. The restaurant is open for indoor dining, outdoor dining and greenhouse dining serving dinner and to go options seven days a week. Special events are held throughout the year including Blues, Brews and BBQ, a staple of the summer season in the Lake Region.